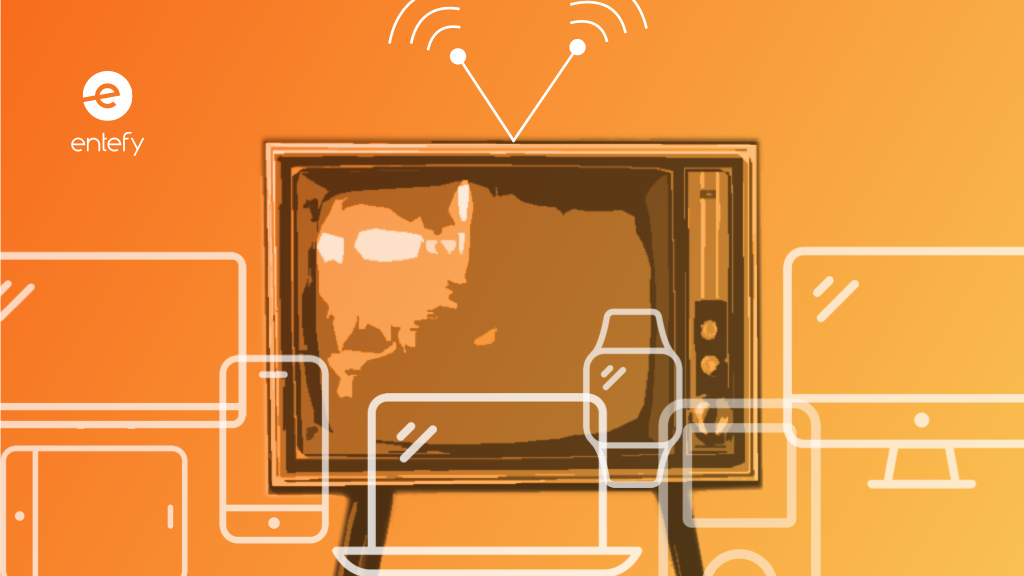 In 1950, only 9% of households had a TV, though that number exceeded 50% within just 4 years, by 1954. The standard setup was one TV in the living room for everyone in the household to watch at the same time. By 2010, there were nearly three TVs per household (2.93), with 55% of households owning 3 or more sets. In that same year, there were 2.58 people per household, which means that there was more than one TV for every person in the U.S. on average. These choices are wonderfully broad and diverse but that rich diversity comes with a meaningful cost: complexity.

These days you don’t have to have a TV to watch TV anymore. You can watch TV shows on your phone, on your tablet, on your computer. When you add the use of 3.4 computing devices per person to the 2.9 TVs in each home you have more than 6 devices that can be used to watch TV. Today 226 million people in the U.S. watch TV, live, recorded, or time-shifted.

That’s not all. In 1950, there were only 3 networks, ABC, NBC, and CBS, which distributed almost all television content. Residents in large cities might get these 3 and maybe 1 or 2 local channels. If you lived outside of a city, your viewing options were much more limited. In 1950 there were only 98 commercial TV stations in the entire country; by 2015 that figure had risen to 1,780. By the 2000s, cable or satellite subscribers had access to 500 or more channels.

Television’s broadcast technology evolved from over-the-air analog to analog cable to digital cable and satellite to Internet Protocol television. Not to mention the supplemental technologies like VCRs, Betamax, LaserDiscs, DVRs, and DVDs. Half a dozen satellite TV companies, dozens of cable companies, hundreds of channels, more than a thousand TV stations.

Fifty years ago, your television choices were simple because they were limited. You could choose among 3 or 4 channels with a limited line-up of shows. After you purchased your TV, you paid nothing further because over-the-air was entirely supported by advertising. You decided whether to watch and, if so, what channel. That’s a straightforward and limited decision portfolio.

No longer. Your choices have not just multiplied, they have exploded. What show, on what device, from which platform, via which subscription package, from which cable company? Tablets, digital streaming, asynchronous storage, subscription packages, on-demand shows, smartphone, tablet, computer? How much time, how much money? How do you integrate all these services? Where can you find the specific show you’re interested in? Can you watch it on your laptop while you’re travelling? And on and on.

Over the years, something that was once seemingly simple has now transformed into a complex ecosystem. Television entertainment is ubiquitous, so we perhaps take this complexity for granted. But the complexity of television is just one of many areas where an everyday activity is defined by an extremely long list of choices, platforms, and protocols. And while each one of these choices may be quite light, in aggregate they are nonetheless weighty. We see similar dynamics in other technologies, everything from communication systems to mobile apps to home automation. Simple ideas that quickly become complex. But isn’t the job of technology to simplify our lives rather than complicate them?