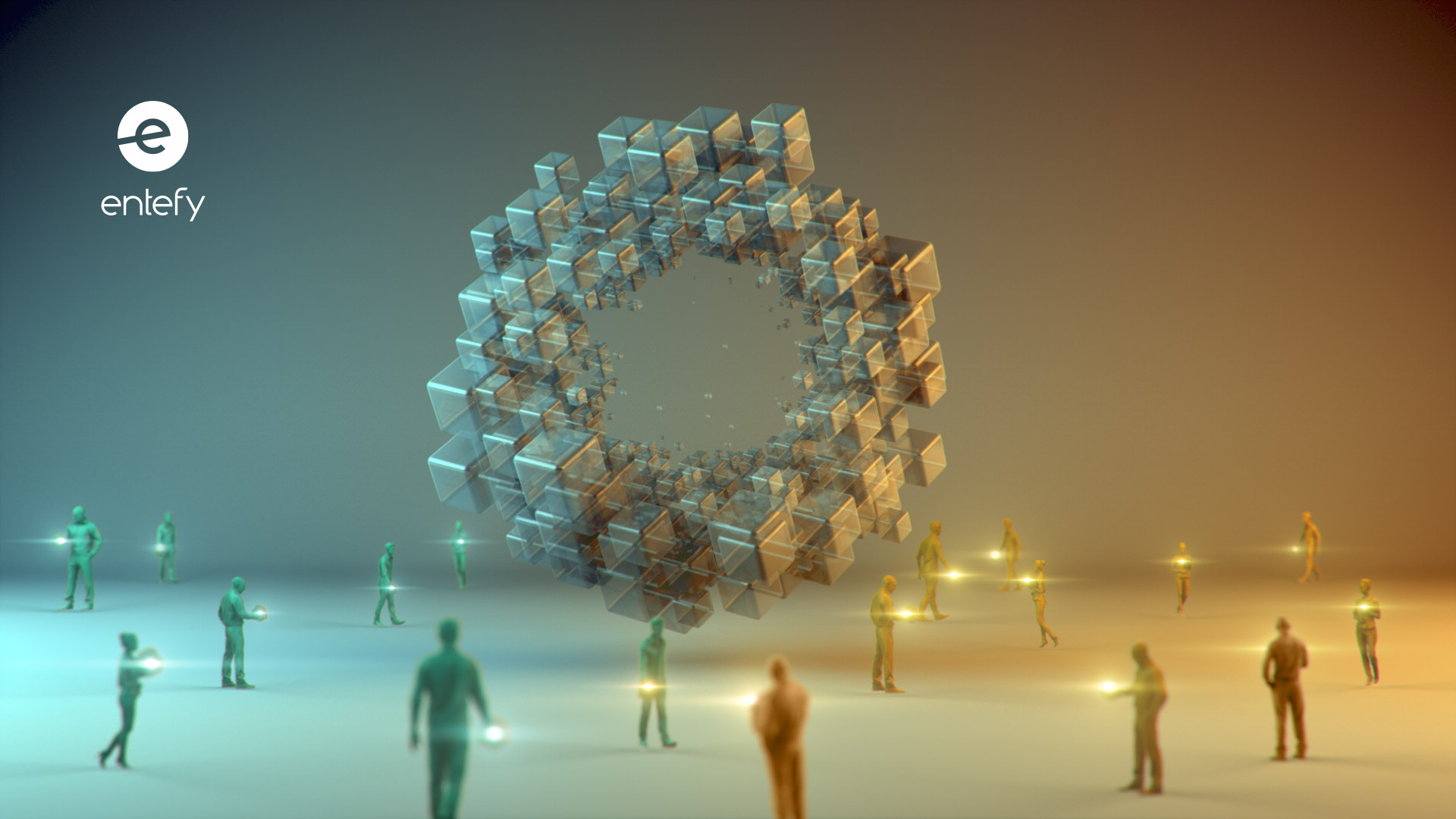 The year was 2009. A mysterious figure (or figures – the jury is still out) named Satoshi Nakamoto had just unleashed Bitcoin, a cryptocurrency that drew equal amounts of excitement and skepticism. Though Nakamoto wasn’t the first person to explore the development of a cryptocurrency, he was the first to bring one to fruition. Bitcoin popularized the concept of digital currencies and sparked impassioned debates about whether a decentralized, digital system could destabilize (and ultimately dethrone) fiat currencies such as the dollar. Bitcoin also introduced the world to the concept of the blockchain.

Blockchain is the technology that underpins Bitcoin and other cryptocurrencies, such as Ethereum and Litecoin. In the eight years since Bitcoin’s debut, blockchain has emerged not merely as a means of creating new types of currencies but as a solution to many urgent concerns—cybersecurity chief among them.

The term blockchain refers to a distributed, decentralized ledger, a database of transactions. Every “block” of information contains the records of previous transactions, creating a comprehensive record. Clusters of data blocks automatically link together through cryptographic algorithms and mathematical hashing mechanisms that validate the information, thus creating chains of data blocks. These chains of blocks give us the term blockchain. Each blockchain then connects to other blockchains via a global network of computer nodes.

The distributed nature of the technology ensures that no one person or institution controls the data recorded on the blockchain. Instead, designated computers form a node network, and before a new data block is added to the chain, every single node verifies its authenticity. The nodes use automated, cryptographic algorithms to approve additions before adding them to the ledger.

Knowing how blockchain works explains how cryptocurrencies function, and also why they represent an entirely new form of monetary exchange. When someone makes a purchase with a cryptocurrency like Bitcoin, the Bitcoin blockchain records the transaction. Bitcoin transactions are transparent, in that certain attributes of the participants in a transaction are publicly available; however, users can take steps to shield their identities and protect their privacy.

Back to blockchain. A blockchain ledger can record a wide variety of transaction types, some of which we’ll discuss in a moment. Because information recorded on the blockchain cannot be altered by any single party, many people see this technology as a means of enhancing both transparency and security. For instance, the British government is mulling the possibility of using blockchain technology to distribute taxpayer-funded grants, allowing for greater clarity on how the money is used.

Many blockchain supporters highlight the decentralized nature of the system. And, on the flipside, it’s why so many institutions like banks love/hate the technology. “Big financial institutions are embracing the technology, in part, because they fear it. Since it is relatively easy to use and entails low costs, new players — even small businesses without much capital muscle — could conceivably use it to offer financial services, too.” Financial transactions tend to flow through intermediaries like banks and credit card processors that collect fees covering the use of their payment infrastructure. Blockchain does an end run around that infrastructure.

Here’s an example. In developing countries, blockchain companies have begun using the technology to provide low-cost remittance services for domestic workers who move abroad in search of well-paying work. These workers are often the primary breadwinners for their families, but they lose a significant amount of money due to high remittance fees charged by traditional banks. Blockchain-powered remittance services promise reduced fees and faster transactions, enabling them to send more of their hard-earned money home.

But there are many potential uses of the underlying technology. At first glance, the Swedish government, anti-human trafficking advocates, and food security experts might not seem to have much in common. However, all stand to benefit from blockchain usage, as the landmark technology can be used to track land registries, identity verification, and food supply chains. The implications of blockchain extend far beyond cryptocurrencies.

Adding artificial intelligence to the blockchain

Coupled with artificial intelligence, blockchain’s impact could increase exponentially. Already, developers and entrepreneurs are exploring how the open-source, decentralized nature of the blockchain could propel AI research in the coming years. But the two disciplines could become a real dynamic duo when jointly applied to cybersecurity.

As Entefy explored earlier this year, artificial intelligence is both a threat and a powerful defense in cyber security. The sheer volume of data being generated globally each millisecond far exceeds the capacity of any single cybersecurity expert to monitor for cyberattacks. We increasingly rely on smart algorithms to flag potential hacks or instances of fraud, and white hat hackers could eventually use AI to anticipate cyberattacks and build better defenses.

On the other side of the equation, malicious hackers are harnessing AI to deploy ever-more-sophisticated cyberattacks, which is why cybersecurity is rapidly becoming an urgent concern for companies and individuals alike. Blockchain may be able to augment our efforts to thwart dangerous cyberattacks, offering a much-needed ray of hope in the face of hacks such as the Equifax data breach and WannaCry ransomware attack.

Interest in blockchain is undisputedly on the rise. Forbes noted that “blockchain-related technology” was referenced 1,500 times in corporate SEC filings from January-September of this year, indicating real enthusiasm among businesses and investors. It’s blockchain’s time to shine, especially when it comes to cybersecurity: “Blockchain technologies are, after all, the culmination of decades of research and breakthroughs in cryptography and security.”

The encryption built into the blockchain makes it a natural tool in the quest for enhanced cybersecurity protocols. It also offers another benefit to experts fending off cyber attackers. Rather than use passwords for identity verification, blockchain security platforms can use public and private keys that are associated with encrypted data files that live on the blockchain.

Unlike centralized password databases, which can be relatively easy targets for hackers, the individual keys are virtually impossible to crack. Some companies that have begun using blockchain technology in their security protocols also use two-factor authentication to add another layer of defense.

Messaging services also benefit from blockchain-powered security, as these programs can distribute metadata in such a way that prevents hackers from using people’s digital footprints to steal their information. This dissemination of data is important, because it abstracts the information from hackers even more than simple end-to-end encryption.

Blockchain could help secure cloud network usage as well, by allowing companies to share only partial data with different parties instead of providing full access to their files. Some platforms already use blockchain algorithms to fight cyberattacks by time-stamping activities in a way that pinpoints when attackers try to manipulate their data.

Blockchain is even being highlighted as a more secure alternative to Social Security numbers, something on everyone’s mind after the Equifax breach. A cryptographic identification system could better safeguard citizens’ data than the traditional Social Security system. Estonia’s government has already moved toward using blockchain and biometrics to record and secure individuals’ information. Along with Dubai, Estonia is also exploring the use of blockchain to protect individual medical records.

Of course, no system is perfect, especially not one that’s less than a decade old. In a Deloitte report on blockchain and cybersecurity, the organization noted that despite the increased protection of private keys, these can be stolen or intercepted. For instance, the more devices a person uses with their key, the more likely they are to lose control of their data access. Nonetheless, Deloitte also noted that the cryptographic algorithms used to generate private/public key pairs “are hard to break with current computing power.”

Blockchain systems offer a much-needed upgrade to the way we defend ourselves against malicious hackers, especially when combined with machine learning systems designed to identify suspicious behavior and anticipate attacks. Blockchain provides us with new ways of looking at cybersecurity and defending ourselves against the rapidly advancing hacks of the future.