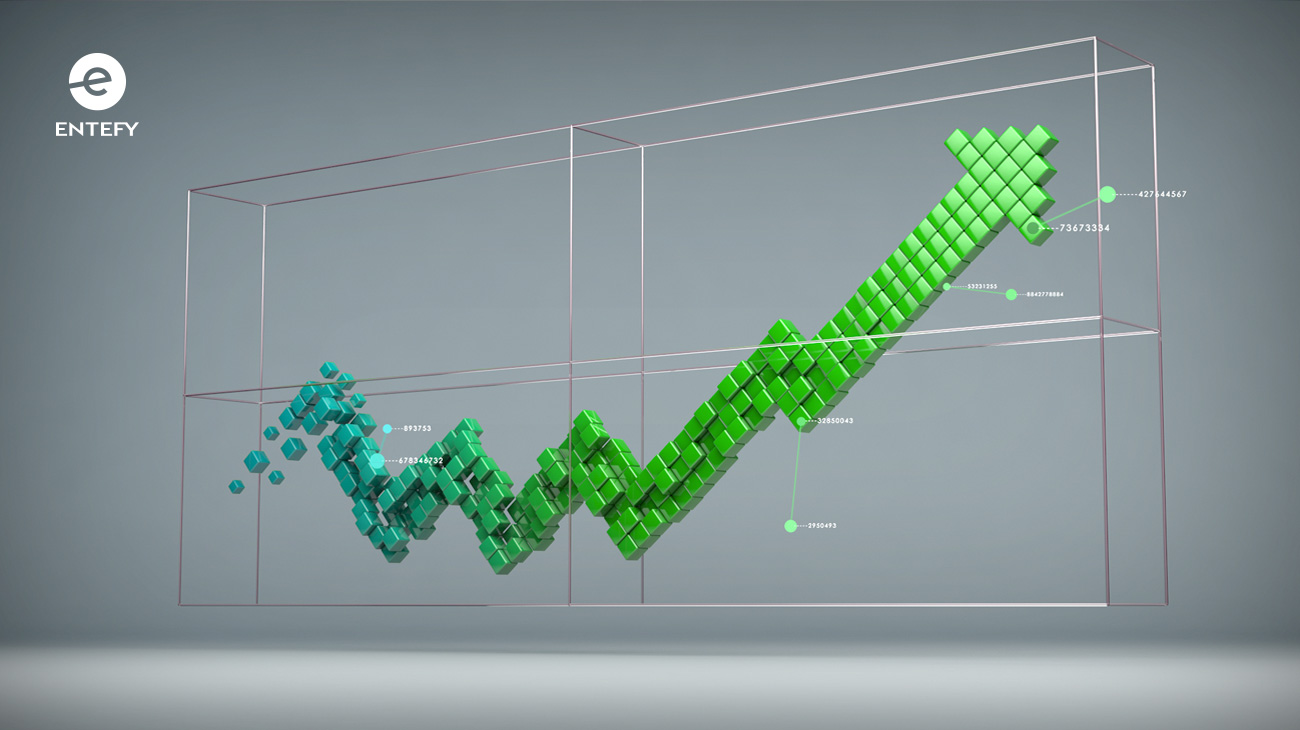 News about blockchain itself can go unnoticed given the public interest in cryptocurrencies like Bitcoin and Ethereum. After all, stories about buying pizzas with Bitcoin are flashier than an analysis of how blockchain might improve the security and portability of medical records. But if you’re paying close attention, there have been many significant announcements of blockchain-based business initiatives at some of the world’s largest companies. They just get drowned out by the crypto craze.

Entefy wanted to discover just how widespread the use of blockchain technologies is around the globe. We decided to use the 30 companies in the Dow Jones index as proxies for the world’s key commercial sectors. The question we wanted to answer: What can we predict about the future of blockchain from the current blockchain strategies of the world’s largest companies?

We found some surprises along the way. Naturally, many of the most sophisticated blockchain adopters come from the technology and finance sectors. However, the novelty and innovation of blockchain investments outside of those verticals was most surprising.

We’ll start with highlights of some high-profile yet little-known blockchain initiatives at Dow component companies. Further below, we have shared the complete findings as a quick reference guide.

The retail behemoth appears to be going all-in on blockchain technology. It has filed patents for distributed delivery system applications and, more recently, a concept for enabling customer resales using blockchain tracking.

The resale concept would allow shoppers to register their purchases on the Walmart blockchain and then use the verified data to resell those products down the line. So, presumably, if someone purchased a piece of furniture from Walmart, then decided to list the item online when they moved a year or two later, the product and purchase information would be easily accessible and verifiable by potential buyers.

If Walmart is successful in developing a blockchain-based delivery system, the program could facilitate not only location tracking but monitoring of factors such as environmental considerations as well.

But those aren’t the only ways Walmart is incorporating blockchain into its business. The company is also exploring the use of blockchain for improving food tracking, which could prevent or reduce the impact of food safety crises such as the recurring e.coli outbreaks in the U.S.

The Imagineers at Disney are responsible for Dragonchain, a blockchain protocol designed to be more secure than systems using the Ethereum platform. Although the project began in 2014 as a means of creating an in-house asset management system, Disney released it as an open source initiative two years later.

Today, the one-time Disney employees who built a non-profit around the technology are looking to turn the platform into a business and make it available as a turn-key product to other companies.

Work is already underway to design blockchain systems that overhaul existing medical records systems. Current records management processes are often insecure and inefficient, contributing to physician burnout and patient frustration. But UnitedHealth is working with several other healthcare providers to reduce costs and strengthen the quality of their data via blockchain.

As of 2017, the healthcare industry was spending $2.1 billion a year on data collection and maintenance. UnitedHealth and its partners aim to lower those expenses, streamline data flows, and decrease redundancies, beginning with testing blockchain applications for improving provider demographic data. They’ll also use their pilot program to explore options for revamping data input and sharing in other areas.

Numerous blockchain applications in government have been identified, but Coca-Cola has carved out a novel approach to a grave human rights issue. The U.S. State Department and Coca-Cola announced earlier this year that they will use blockchain to reduce forced labor and create safer circumstances for sugarcane workers around the world.

The idea is to use distributed ledger technology to record workers’ employment information and contracts, which could help insulate them from exploitive practices. The issue they’re tackling is a significant one, as 24.9 million people suffer under forced labor situations. If the project is successful at preventing labor abuses, it could inspire blockchain applications for other humanitarian issues.

The global communications and technology company has announced plans to use blockchain for data security. Verizon partnered with an Estonian company that created a blockchain solution that secures information right at its source. In other words, rather than information being added to the blockchain and transferred between relevant locations, an enterprise’s data is hashed within its system, and the hashes are then transmitted to other programs. Blockchain is often discussed as a potential salve for growing cybersecurity concerns, and Verizon’s initiatives could become a model for other enterprise companies.

Blockchain projects of the Dow Jones 30

Notes on this research: Where a company has announced multiple blockchain projects, our team has selected the most innovative or noteworthy. Links to sources are included for reference. Companies tagged “No/Unclear” may be pursuing blockchain initiatives but have not officially released details.

Description: 3M used the Microsoft Azure blockchain platform to develop a smart labeling system that would reduce counterfeit drugs. By having drug labels scanned and recorded on the blockchain at every point in the manufacturing and distribution processes, 3M aims to limit instances of counterfeit drugs on the market. Not only does this decrease drug companies’ costs, it also reassures consumers that when they receive their prescriptions, they’re getting the right medication.

Description: AmEx partnered with the wholesaler Boxed to test a loyalty rewards program run on blockchain and smart contracts. Boxed will be able to make loyalty offers and fulfill them over smart contracts, while AmEx will receive anonymized data about which offers were made and accepted. If the project is a success, it could implement similar processes for other merchant partners. American Express also launched blockchain-based B2B payments via Ripple for U.S. to U.K. transactions in late 2017.

Description: Apple filed a patent application in late 2017 indicating that it is exploring the use of blockchain and public key infrastructure technology for certifying timestamps.

Description: Boeing filed a patent in 2016 describing its work on an “on-board backup and anti-spoofing” system that would also serve as a back-up navigation program when GPS access lags or becomes unreliable.

Description: In March 2018, Cisco filed a patent describing a group messaging concept. The platform would be secured by cryptographic keys, so users could assume a high degree of safety for files, chats, and membership records protected by the system.

Description: Dow DuPont is reportedly also working with IBM and Maersk as part of the joint venture’s blockchain pilot program.

Description: An engineer at GE Global Research said the company is evaluating potential applications for blockchain in developing a marketplace that connects customers and renewable energy producers.

Note: GE is scheduled to be removed from the Dow Jones 30 index.

Description: Goldman Sachs is doing its part to educate consumers about blockchain technology and its potential uses via an interactive section of its site dedicated to the topic. The company also announced that it is establishing a Bitcoin trading operation, a landmark move for the financial services industry.

Description: Home Depot is one of several corporations sponsoring research at Auburn University into how distributed ledger technology can improve supply chain functions.

Description: IBM has been developing blockchain applications for a wide array of industries and has partnered with other organizations to put the technology to work in the real world. Walmart used IBM’s Food Trust blockchain program in its food tracking efforts, and IBM recently announced a joint venture with Maersk aimed at improving cross-border supply chain functions using blockchain.

Description: Since 2016, Intel has been experimenting with accelerating cryptocurrency mining to make the process more energy-efficient and cost-effective. Intel researchers are also looking at how blockchain mining platforms could be used in genetic sequencing.

Description: Johnson & Johnson is working with Intel, McKesson Corp., and other partners to test the use of blockchain in alleviating the opioid epidemic. The companies will use simulated data to see whether secure blockchain records can prevent “double doctoring,” in which patients visit multiple doctors to obtain opioid prescriptions. In theory, blockchain records will help physicians track which medications patients have already been prescribed, limiting access to the problem drugs.

Description: JPMorgan Chase announced in October 2017 that it had launched a blockchain-based payments processing network that would facilitate faster, more secure transactions. The company worked with Australia and New Zealand Banking Group and Royal Bank of Canada on the project.

Description: Merck joined the Enterprise Ethereum Alliance, a coalition of corporations interested in using Ethereum’s blockchain for smart contracts. The Ethereum blockchain is well-known for being the technology underlying ether, a cryptocurrency. However, the open source blockchain has drawn attention from companies keen to use it for smart contracts, which allow parties to create secure, transparent, and verifiable business agreements.

Description: In addition to the Azure blockchain platform, Microsoft is developing blockchain solutions for digital identity security. It envisions users reclaiming ownership of their online information via encrypted data hubs and decentralized identifiers.

Description: Like 3M, Pfizer is experimenting with using blockchain to track prescription medications and stem the flow of counterfeit drugs. The company partnered with Genentech and other organizations on the MediLedger Project to create blockchain solutions to supply chain issues.

Description: Procter & Gamble is exploring the blockchain platform being developed by Danish shipping giant Maersk for use in streamlining its global supply chain.

Description: UnitedHealth Group is working with Humana, Quest Diagnostics, and MultiPlan on a blockchain pilot program aimed at improving data collection and management among healthcare providers.

Description: United Technologies has stated that it is “actively exploring uses for blockchain technology as it has the potential to drive positive profound business change for UTC.”

Description: Verizon is working with a European startup to deploy blockchain security solutions by hashing information within an enterprise system rather than transferring it across locations.

Description: Visa worked with a blockchain startup to develop a cross-border payment system for B2B transactions. As of November 2017, Commerce Bank and several Asian banks were involved with the project. Visa is expected to launch a commercial service in the middle of this year.

Description: Walmart filed a patent in November 2017 related to using blockchain technology to track and verify purchases that could be resold at a later date. The company has also worked with IBM to test food tracking via blockchain for improved food security.

Description: Developers at Disney built the Dragonchain blockchain for internal asset management, but the technology was eventually made open source. Former Disney workers have now built a non-profit and company around Dragonchain and are looking to make it more widely available.