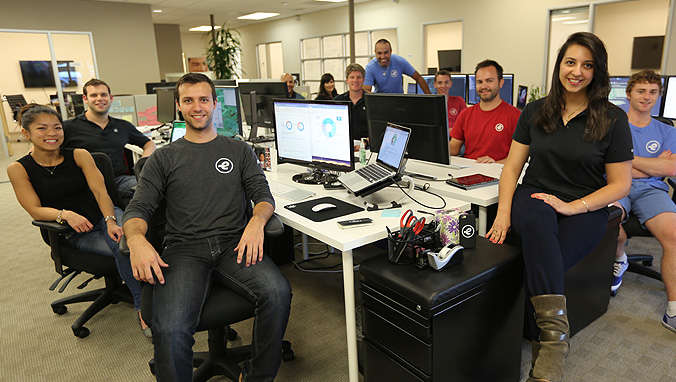 PALO ALTO, Calif., September 8, 2015 – Entefy, the company that is rewriting the code of communication to simplify your digital world, announces the closing of a new round of funding, and is now valued at $50 million pre-Series A. The capital will be used to add key hires, expand the company’s IP portfolio, and accelerate development of Entefy’s core technology platform.

Since Entefy’s founding, the company and its sibling co-founders have experienced strong momentum and growth. Brienne Ghafourifar had initially raised $1 million for Entefy. At 17, that made Brienne the world’s youngest college graduate to raise $1 million in venture funding. Today, this figure has grown to $9.7 million, and the co-founders have gone on to author several key pending patents—in communication, privacy, security, and data intelligence—and to attract a world-class board of directors and group of strategic advisors.

“We are incredibly humbled and honored by the tremendous support from our investors and advisors in this round,” said CEO and co-founder Alston Ghafourifar. “Most importantly, we’ve gained high-profile partners who share our vision of simplifying the way people communicate and interact in the modern world.”

Currently, smartphone owners interact with others through an average of 7.4 social/communication applications. In addition, the applications required to interact with IoT devices are growing at a phenomenal rate, forming an increasingly chaotic digital world that is becoming more challenging for people to manage. Entefy will free people from devices, protocols, and services that dictate the way we communicate by providing a more unified and natural way to interact.

“Entefy is thrilled by the excitement from our investors,” says co-founder Brienne. “Their support is testament to Entefy’s vision—changing digital communication and interaction forever.”

ABOUT ENTEFY
Entefy is rewriting the code of communication and digital interaction. We’re introducing the first technology to give you seamless access to your conversations, connections, smart things, and services from all of your favorite devices. Our Universal Interaction Engine provides a simple, focused communication experience that puts you at the heart of your hyper-connected world. Entefy is based in Palo Alto, California.