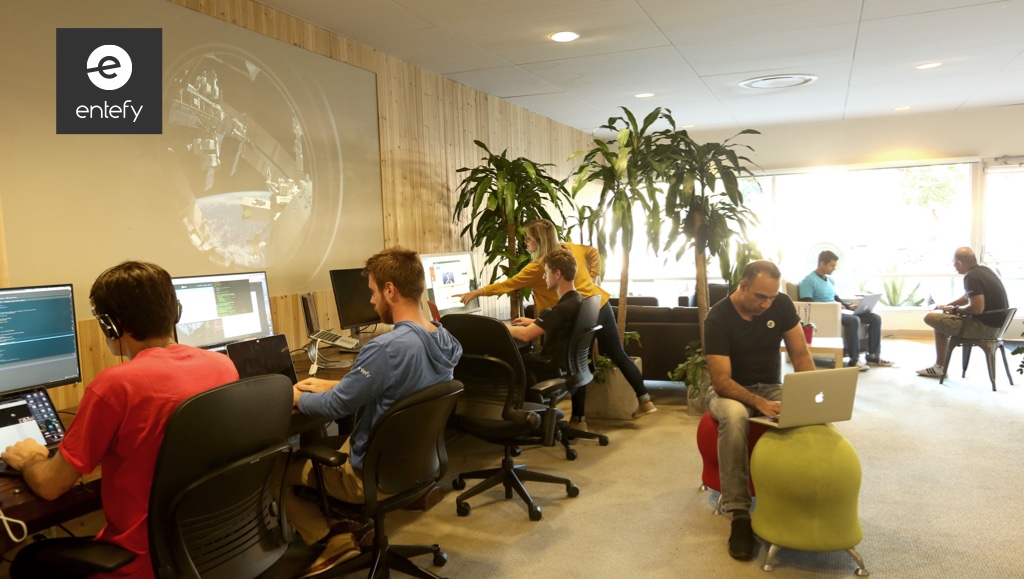 Have you ever sat comfortably in a quiet place and looked out at the hustle and bustle of a city street? Libraries are often like this, and a home office can provide the same sense of separation from the busyness of the outside world. These spaces are perfect for open, deep thinking and productive work. But if you had to design one from scratch, how would you go about it? As a growing company, this is a challenge Entefy has had to tackle.

“Better is better” is a core mantra that inspires our work, not only in engineering the product, but in engineering our workspace and how we collaborate in it every day. This continual quest for better has given us some insights into how to create a workplace that simultaneously supports inspired productivity and focused problem solving. We thought we’d share a couple of lessons we’ve learned about modern workplaces:

Believe it or not, open floorplan offices have been controversial for decades. The case against the open office centers around the productivity loss from noise and other distractions.

Entefy’s decision to choose an open floor plan was driven by data that demonstrates the strengths of openness. One study of more than 2,000 employees in an open office found that productive people create a “spillover effect” that boosts the productivity of their neighbors. This effect can be quite strong:

“…Neighbors have a significant impact on an employee’s performance, and it can be either positive or negative. In terms of magnitude, we found that approximately 10% of a worker’s performance spills over to her neighbors. Replacing an average performer with one who is twice as productive results in his or her neighboring workers increasing their own productivity by about 10%, on average.”

Our experience with an open office echoes this data. Team members sit (and stand) nearest to teammates from their assigned Force (one of Entefy’s 4 operating groups) but not too far away from team members who work in other Forces. This approach gives us the benefits of the creativity and problem solving boost created by close proximity. To address the occasional noise and distraction inherent to open workspaces, our team uses headphones or private conference rooms (with whiteboards of course) for when additional “space” is needed to support focused, deep work.

To us, an open office isn’t just about the floorplan. It’s a mind space. Walls create barriers to collaboration and companionship. Being open to ideas from others is a requisite for rewarding collaboration. And openness to a diversity of ideas is what leads to great innovation.

Another factor that boosts the team’s effectiveness is flat-ness. Entefy is organized as a flat organization, meaning we minimize the ranks of managers by granting team members broad autonomy and authority to pursue their best work. But don’t confuse “flat” with lack of structure, oversight, or accountability. What we’ve found is that for small, driven teams, flat leads to better and faster decision making, lower costs, and improved organizational agility overall.

In a traditional hierarchical organization, a cadre of managers and executives possess most of the organization’s decision-making authority. Downsides of this structure can include inefficient information flow, slower decision making, analysis paralysis, increased organizational bureaucracy, and escalating operational costs. The managers on top are often far removed from the details of any given decision:

“In most companies the hierarchy is neither natural nor dynamic. Leaders don’t emerge from below; they are appointed from above. Maddeningly, key jobs often go to the most politically astute rather than the most competent. Further, because power is vested in positions, it doesn’t automatically flow from those who are less capable to those who are more so.”

What we’ve found is that if you have the right individual contributors in the right positions, they will be better positioned to make faster informed decisions. With a flat organization, removing layers of oversight and empowering employees to develop their best ideas gives the entire organization a boost in productivity.

Recently, a visitor to Entefy’s office in Palo Alto gave us an unexpected compliment about our work environment. She said that “Entefy feels like a place of solace and inspiration,” adding that the environment was both electric and peaceful.

When all the elements click—the open space encourages collaboration and creativity, while the flat organizational structure boosts motivation and productivity—even a first-time visitor can sense the electricity in the air.